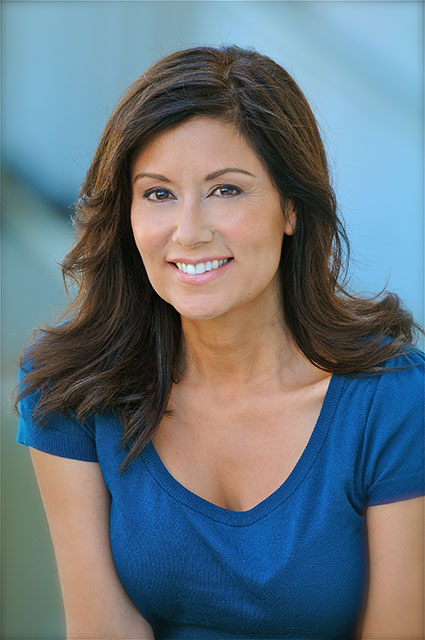 Christine was born and raised in Michigan and eventually moved to the finest city in the world, San Diego, California.

As a teen she began taking acting lessons and performing in community theater. She landed a lead role in the comedy “I Hate Hamlet” and was addicted to performing ever since.

She attended college, received a bachelor’s degree in Business and began a professional marketing career. She is grateful to have never stopped acting, which led to many fun gigs in commercials, videos and modeling.

As a lover of learning, she went back to college and received training in video production, editing, writing and journalism. She soon landed the role of news anchor for a live television show where she honed her on-camera, writing and teleprompter skills.

With her love of production and acting came another exciting opportunity, the role of Producer at a multimedia production company. She began creating commercials and videos for business and government clients. Not only did she produce the media, but she also appeared in them, providing her natural talent for voice overs and on-camera work.

Christine is enthusiastic about life and has many interests, including animal welfare.  She’s an advocate for feral cats, helping to protect and improve their lives. Take a look at her project here, Feral Cat Chat, where you can read her blog, Changing the World One Kitten at a Time and learn how she became involved in helping cats.

Christine is a friend of animals everywhere, a thespian, yoga lover, surfer, marketing professional and all around fun loving human. Today she is excited to be Director of Video Marketing, at a creative agency, where she lends her confident, upbeat style to all her on-camera projects.

Christine’s goal is to add more value to your project than you ever dreamed possible. Her writing, video production, and acting skills make her the ideal producer, host, actress, spokesperson or voice actor.

She takes her craft seriously. Originality, Quality, Detail, Storytelling.
Bring your project to life with Christine.